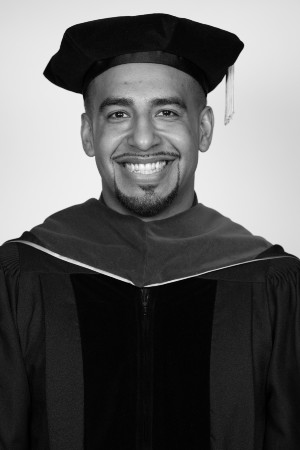 Esmat Ishag-Osman is graduating with a Ph.D. in political science, with a concentration in American government and a minor in urban and comparative politics. His dissertation research focused on American primary systems, examining their impact on candidate behavior, electoral outcomes and democratic governance.

Before attending Wayne State, Ishag-Osman received a bachelor's in political science from Michigan State University. A first-generation immigrant whose family moved from Ghana to Detroit in 1998 after his mother received an opportunity to earn her Ph.D. in cancer biology from Wayne State University, he felt it was only right to continue the legacy Wayne State afforded his family and chose Wayne State to pursue his doctoral degree.

In his seven years living in Detroit, Ishag-Osman has been involved in every aspect of civic life in the city. He has three years of teaching experience, working as a political science instructor at Wayne State University. During that time, he also worked as a senior policy analyst for a Detroit-based, civic engagement nonprofit called CitizenDetroit. He has worked on two city-wide campaigns, serving as a campaign manager for a school board race and treasurer for a district court judge's re-election campaign. Ishag-Osman has also worked as a community organizer, serving as a district vice chair for Michigan's 13th Congressional District Democratic Party Organization. He is a 2021 fellow in the Michigan Political Leadership Program and is currently on the board of directors for Black Family Development, Inc.

Ishag-Osman lives in Detroit with his wife, who is pursuing a master's at Wayne State. He is currently working as a research assistant with the political science department and the Center for Urban Studies.